Mario Adventure is large romhack of Super Mario Bros. 3 for the Nintendo Entertainment System created by DahrkDaiz and significantly alters many aspects of the game to create something almost entirely new with new graphic, enemies, powerups, and much more.

Mario Adventure is a hack of Super Mario Bros 3. These are the most noteworthy characteristics of it. Mario can keep a power-up in reserve, similar to how Super Mario World works except the change is immediately effective.

Super Mario Bros. 3 is a universally acclaimed platformer developed and published by Nintendo and released on the NES in 1988. Praised in its time as “the Mona Lisa of gaming”, it stands firm as the third best selling NES game of all time and was cherished for its replayability, charming graphics, and “absolutely impossible to put down” gameplay.

This game has the following new features

If you want to see a video of Mario Adventure in action, check out the video below.

Mario Adventure is easily one of the greatest NES hacks of all time and stands out as a must for any fan of Super Mario Bros. 3. This hack sets out to change nearly all aspects of the original game by changing levels, items, enemies, and a number of base game functionality. Most notably, most levels in this hack end with a mini boss fight.

With all new level design and some added variety one would not expect from the typical Mario game, this hack can prove to be a tad bit more difficulty than its parent title. This is somewhat balanced out by the changes made to powerups and the ability to store powerups for when you really need them.

Mario Adventure throws out the typical linear progression of NES Mario titles and opens up all of the worlds for the player to take on whenever they feel like it. The main goal of the game is slightly different than ususal, requiring the player to seek out hidden keys in order to progress to the game’s finale. 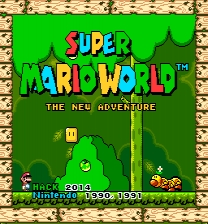 A slightly altered title screen is present in this hack as presented below.

Due to the nature of new levels and enemies, many graphical changes have been made in Mario Adventure. Most of these changes are to tilesets and color palettes and the changes that you will notice to the Hubworld and Overworld sections of the game.

Mario Adventure does a lot to change the base functionality of the original Super Mario Bros. with various additions and alterations. Some of the biggest changes to the game include: infinite lives; a Hubworld where all worlds can be accessed at any time; significantly improved powerups such as the Fire Flower providing increased jump height and fireballs that travel in a straight line; Kuribo’s Shoe can be stored and accessed throughout levels; and more. The game also allows the player to store one powerup so that they may switch between them at any time or access a powerup when they are in a tough situation.

Ultimately, the core gameplay is very similar however players will note that each level tends to end with a mini-boss battle and the overall goal of each world is to find a hidden key which is necessary in order to access the final 8th world and beat the game.

A number of melodies have been altered slightly for this hack and some new sound effects added as well.

If you wish to play this game you can download the Mario Adventure Rom by clicking here.

So is this game worth a try? Mario Adventure is a must for all Mario fans as it adds a slew of new content to an already fantastic timeless classic. If you have ever wanted to relive the days of playing through Super Mario Bros. for the first time, this hack shakes up the base game just enough to scratch that nostalgia itch while proving new and interesting features for players to enjoy.

If you have played this game please let us know what you thought of the game by leaving us a comment.

As of 2006, this is hailed as one of the greatest NES hacks of all time. This Super Mario Brothers 3 hack changes the game right down to the core by tweaking the actual game engine itself!

Aside from the ‘typical’ graphics and text changes, this hack alters musical melodies, a full line up of all new levels, new power ups, new abilities for Mario, and even new enemies! When I say new, I’m not talking about changed graphics; I’m talking about completely new power ups and monsters. Money mushrooms, invisible Mario, time stopping potions, Kuribo shoes in any level that don’t disappear, shy guys that create projectiles, heat seeking bullet bills, and others are just the beginning of the changes made to this game.

On top of that, you have random weather patterns on every stage, boss battles on every stage, and infinite lives, so your coins go to more useful purposes. They will be used to buy items from Toad’s house and get some level exits to appear. Let’s not forget stored, and switchable, power ups such as those found in Super Mario World!

This description really doesn’t do this hack justice. It’s certainly impressive to say the least. Just download it and try it out! It’s definitely one of the most advanced SMB3 hacks to date and pretty darn fun as well!